Drawing a bitmap in the window (Leaf-SDL #2) 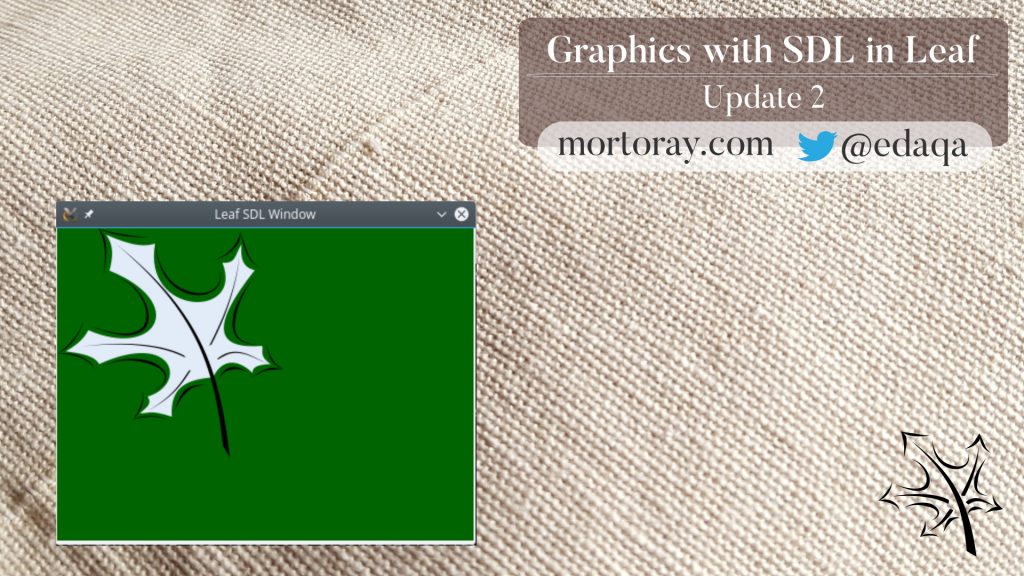 I addressed two problems since last update: A bad error message, and an image loading error.

The bad error message was triggered when an unknown symbol was used in a type, for example:

The logging system could already deal with symbols, but this conversion code wasn’t passing the value up properly. After a bit of plumbing I got it to produce a new error message properly in the logger.

In this snippet of code the check_sdl for sdl_blit_surface was reporting an error:

Ignore that TODO for a second… I added code to print the SDL error messages. We don’t have a library facility yet to print, or convert, ABI null-terminated strings; a quick loop will do:

The error was SDL_UpperBlit: passed a NULL surface. The code looked right, and I thought the values were okay, but I had no way to test them. That’s what the TODO bit was about. When calling sdl_load_bmp_rw I couldn’t inspect the result. To see if it was valid I tried printing the size of the image:

That gave a segfault, indicating image was definitely not valid.

To test for null though I’d need a way to look at this value. In Leaf a value_ptr is an extrinsic property, disallowing any kind of direct manipulation (like comparison).

I introduced the as_abi_ptr builtin function to convert a value_ptr into a abi_ptr, which is a binary type. We can compare those, thus enabling this function:

I could now see the mysterious File is not a Windows BMP file error. I resaved the file in Gimp and it just went away, leaving us with the result shown below. 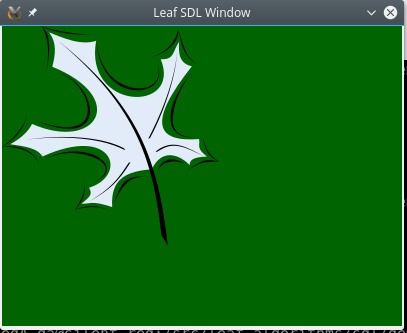 For next time hopefully I can do a bit more drawing, with rectangles.

Join in the fun by checking out the SDL Branch of Leaf. The demo code is on github, though I can’t promise what the current state is 🙈. Be sure to follow me on Twitch as well.

Drawing a bitmap in the window (Leaf-SDL #2)