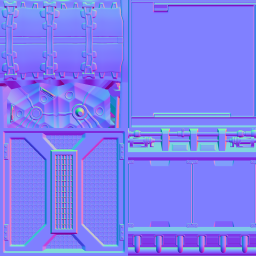 Normal maps preserve the lighting fidelity of a high polygon count model when it is reduced to a lower polygon count. Model designers tend to work with models that are far too detailed to be handled in typical real-time applications, like games. The models are reduced from this high count to a low count, producing a normal map in the process. This map is used during rendering to help recreate the details of the original model.

This article is based on how I use normal maps in my game Radial Blitz for iPad or iPhone. Radial Blitz – A high paced 3d reaction game.

Lighting plays a vital role in the rendering of a mesh (the vertices that define the shape of the model). One of the key variables in lighting is the face normal: the direction the triangle is facing. This is combined with the light sources to determine how much the individual pixels are illuminated.

In a very high-poly mesh it’s sufficient to use a single normal per face. Each triangle may only cover a few pixels. With a low-poly model however, each triangle covers a large number of pixels. If we use a single normal for the entire surface the result would have hard edges — we’d clearly see the polygon construction of the object and each face wold look quite flat.

Most meshes actually use a different normal for each vertex, in which case the pixels use an interpolated value. The principle above still applies.

This is where a normal map comes in. Instead of using the same normal for the face, we use a per-pixel normal. It’s easy enough to encode such information in an image, just like any other texture map. But where do the values for this image come from?

The high-poly mesh has a distinct normal per face. When it’s reduced to a low-poly mesh those normals can be burned into a map on the new surface.

Let’s use a 2d line segment as an example. The top is the high-poly segment, and on the bottom it has been reduced to a single segment (one face). Notice how the per-face normals from the top have been transcribed to positions along the reduced model. 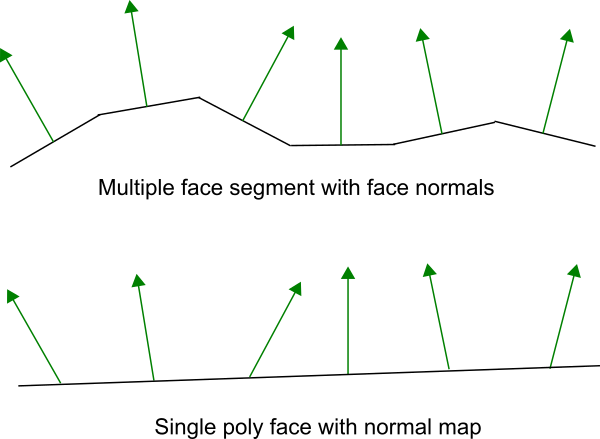 Though we’ve lost the faces of the high-poly model, we’ve retained their normals. This allows the scene lighting to treat the surface as though it was still comprised of many faces instead of just one.

The values in the normal map are relative to the face they occupy. The world normal of each pixel must be calculated to do the lighting. This involves transforming the normal vector by the tangent matrix.

That seems simple except Tangent3x3 is a rather complicated construction.

Each vertex of a face has the three attributes: VertexNormal, VertexTangent, VertexBitangent. These are stored with the mesh as vertex attributes. The VertexNormal is the easiest to understand. It says what direction the vertex is pointing. This is relative to the object, thus we rotate it by the WorldRotation.

At some point in the history of computer graphics the Bitangent became known as the Binormal. You’ll very frequently see the term Binormal used instead of Bitangent. There is actually a difference, but so long as you are using the right formula in rendering, it won’t matter which term you choose.

Typically the vectors of a 3-space are orthogonal: a euclidean space. Knowing this, the tangent and bitangent could actually be calculated from the normal (well mostly, there are a few missing details). There is however no need for a model to export a euclidean space. If the source model is curved, the vertices may be better represented by non-orthogonal axes.

The calculation of the Tangent3x3 can be quite expensive on a mobile device, the target of my Radial Blitz game. Whereas on a desktop this calculation cost is not really an issue. To reduce this cost many of our models use “object normal maps” instead of regular “normal maps”.

This greatly reduces the calculation cost of the per-pixel normal. There is no need to calculate a tangent matrix.

This major efficiency boost comes with a couple of extreme limitations however:

Radial Blitz uses object normal maps for the modelled targets and uses face normal maps for the dynamically constructed objects, like the tunnel, and several small objects like the rocks. The use of object maps definitely made a difference in frame rate, but I’ve unfortunately lost the exact numbers.